De Maria House is the ideal starting point for every kind of walk.

From Massa Lubrense it’s easy to get to Sorrento, Positano,Ravello and Amalfi. You can reach in a short while the wonders of the Sorrento Peninsular and the Amalfi Coast together with the most fascinating art-cities like Pompeii, Ercolano, Napoli and Caserta.

Through ravishing paths and historical streets you might stop and staring at a wide variety of landscapes and beauties, both architectural and naturalistic. 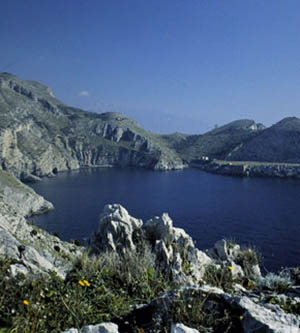 Massa Lubrense is the city that will welcome you.

This joyful place features two location made famous by mythology: Punta Campanella and the Ieranto Bay. It is said that the uncontaminated beauty of the Ieranto Bay was populated by the spellbinding mermaids that Ulisse met in his travel and then he stopped in the Athenainon temple of Punta Campanella.
Ieranto is also famous for his Marine Park founded in 1990 in order to preserve the bay as one of the most beautiful Campania coast environment.
To fully enjoy the naturalistic beauty we suggest to walk through the bay from where you can admire exclusive breathtaking views, like cliffs rising sheer from the sea, crystalline waters, Mediterranean maquis. 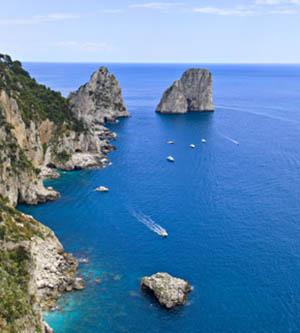 Capri is a must-see for sea and nature lovers.
It’s easily reachable from Massa Lubrense thanks to the efficient bus and hydrofoil links.

For a single day visit we suggest some fundamental stops:

Don’t forget to stop in the worldly center of Capri, famous as “the world’s parlor”: here, in “Piazzetta”, you could find some international V.I.P. (with a little luck). 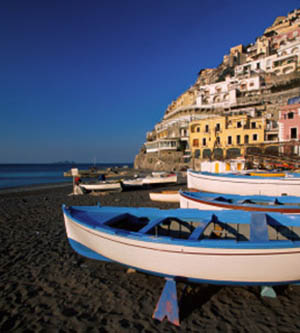 Called “the gem of the Amalfi coast”, Positano is the characteristic town situated in the territory of Salerno, easy to reach from Massa Lubrense with bus and hydrofoils. It’s become famous thanks to its typical squared house with cupola roof, magic views and landscapes, tiny streets along with stairs that join the high part of the town with the beach.

When you arrive in Positano you must visit its wonderful caves (grotta La Porta; grotta di Mirabella; grotta del Generale; grotta di Mezzogiorno) and try to get to the Li Galli island (a small archipelago not far from Positano formed by three small islands where Omero mermaids lived). They are places where the time seems to have stopped or at least it’s running much slower.

When you look at the city from the beach you realize there’s no place like Positano, where there is everything: from the mountain, through small streets and typical shops, passing near plushy hotels and fishermen’s houses at the same time, you reach the restaurants, the beach and the sea. 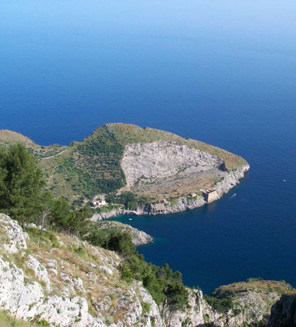 All of Massa Lubrense surrounding, thanks to its typical conformation, it’s the good choice for every kind of trips, by land or sea.

Close to Sorrento and embraced by both Gulfs of Naples and Salerno this land has a rich road network. Some streets pass over old paths, some other are ancient dirty ways of communication that lead to wonderful places covered by Mediterranean maquis, olive and lemon trees. You could also find old buildings, towers and churches with valued paints and majolica of the Neapolitan 18th century art as well as other sites of archeological interest.

All paths feature beautiful landscapes and let you enjoy different sights at once: from the sunset on Naples Gulf with the Vesuvio on the back and with the Ischia, Capri and Procida silhouettes to the twinkle of sunlight when it reaches the water of the Salerno Gulf.

One of the most beautiful bay it’s the “Marina della Lobra” with its harbor, a small natural creek that houses many boats and a nautical foundation. There is also the “Marina del Cantone”, a protected area close to Punta Campanella, with crystalline waters and many archeological sites that show ancient roman villas used by the patricians as a holiday house.
In back of Marina del Cantone there’s the small town of Nerano in the magical reserved area of the Ieranto Bay, whose seabed take care of treasures made of amphorae, furniture and hulks of Greek and Roman age. 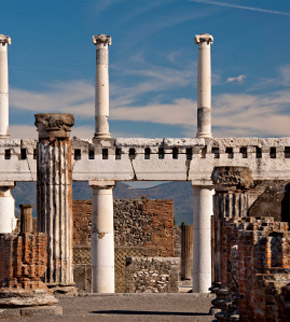 Well known for the Vesuvio eruption that buried it in the 79 AD Pompeii has been one of the biggest and richest city of the Roman age.

You could get there from Massa Lubrense with ease thanks to the local railway and stop off at the famous archeological site, heritage of the whole mankind as it’s a real evidence of the roman age life style. Main places are the “Foro” (the forum), that represented the economical, political and religious centre of the city, and the amphitheatre, the oldest stone build in its genre that housed one of the most impressive moment in the history of rock, the Live at Pompeii by Pink Floyd, a public less concert that represented a memorable event for music.

At the centre of the city there is the Pompeii’s Madonna Sanctuary, a must-see for millions of pilgrims every year. Don’t forget to visit it! 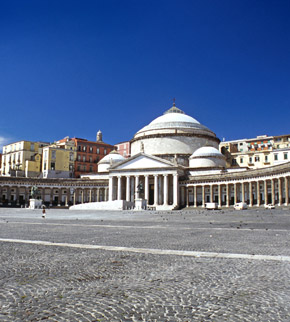 It’s obligatory to spend some time in the “city of sun”.

Leaving Massa Lubrense by hydrofoil you can reach the Naples harbor in the core of the city. Once there you should visit first the historical “Castel Nuovo”, (better known as “Maschio Angioino”) framed by the Naples gulf and the superb Municipio Square. From there you could reach the other famous squares of the city that constitute historical, cultural and artistical heritage. We suggest to visit the Plebiscite Square, the Naples most
representative one; the Dante Square, recently renewed due to the works for the construction of the new metropolitan station and today the most part is a pedestrian area; the San Domenico Maggiore Square, one of the most beautiful places located just in the core of the ancient polis, along the “Spaccanapoli” route; the Del Gesù Square that features the giant obelisk dedicated to the Immaculate and the church of “Gesù Nuovo”.

If you planned to stay a couple of days, we suggest you to visit also some museums: the most important ones are the National Archeological Museum in Cavour square, the Capodimonte Museum (that, with more than 1700 works, has one of the richest paints collection in Italy), the National Museum of San Martino with its well known cribs collection (the biggest in Italy) in which the famous “Cuciniello” stands out. 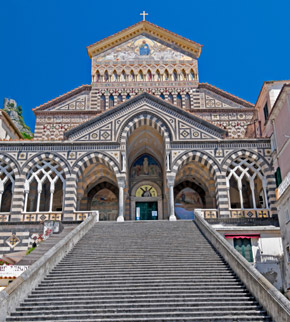 You can easily reach Amalfi, famous for its history as Maritime Republic, from Massa Lubrense thanks to bus and hydrofoils links.

In those days this city had a merchant and a war fleet, both very advanced comparing with the others. This is the reason why we suggest you to visit the city Arsenal: we are sure that this interesting backward travel will fascinate you much.

You can admire also the Dome of Amalfi, famous all over the world for the very particular bronzed leafs of its main portal, the twisted arches and its bell tower turrets.

You don’t have to forget the Heaven Cloister, characterized by Arabian style, that nowadays is a well-cared flower garden surrounded by an Arabian colonnade.

Another amazing step is the Paper Museum, an ex-paper mill changed in a museum in 1969 for want of its owner, who belonged to a family very famous for the production of the well-know Amalfi Paper (or “bambagina” paper). 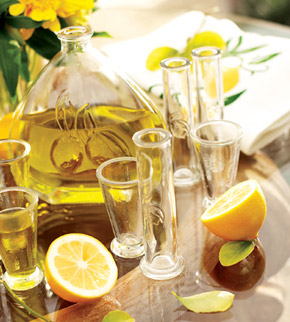 You’ll never get tired of the chaotic going and coming of people in “ Corso Italia” and in San Cesareo narrow streets, where walking at every time, in summer or in winter, between a flow of tourists or in quietness, is an priceless experience.

The more attractive shops are the ones concerning to local crafts: among the typical products, the wooden inlayed boxes and the leather goods are the most famous ; you can find them in any size and shape. Along the main street there are numerous brand-name clothes, shoes and leather goods shops: here you can find the best of Italian tailoring and crafts.

It is very funny visiting the perfumes and typical products workshops, where you can smell the different oils and taste some of delicacies of Sorrento, like “limoncello” and “ babà”. 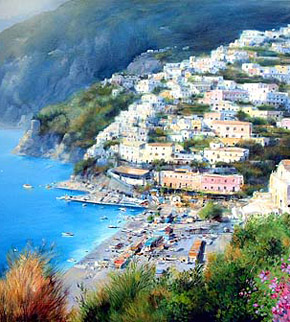 It ‘s fashion to go shopping in Positano, browsing through the shops that exhibit clothes collections, swimsuits and foulard made of linen, silk or cotton. These products are typical and are exported all over the world.

In some workshops it is still possible to get the traditional tailored-made leathered sandals (sometimes embellished by stones, shells and elegant fabrics).

Positano is also rich of art galleries where you can admire and buy different works, from the classical views of Positano to the objects of contemporary art. 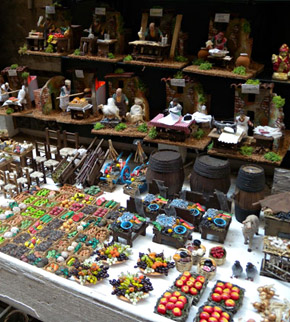 If you love going shopping in a city, we suggest you to take note of the most popular places of Naples for shopping.